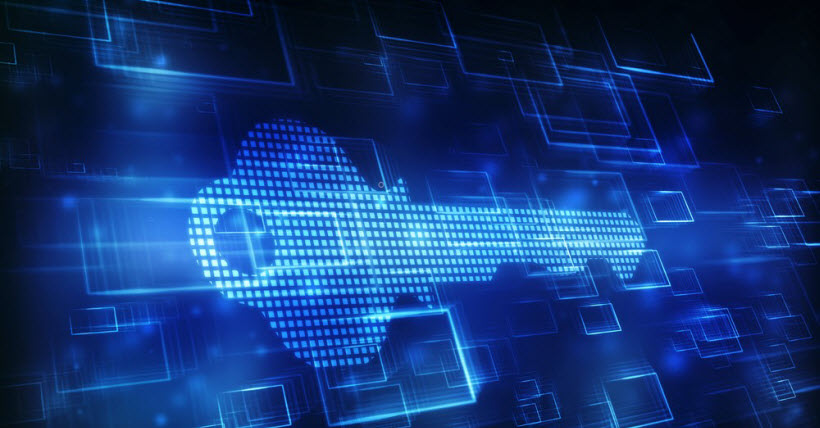 With more data being stored than ever before, many firms are turning to data visualisation to help them understand the truth in their data. The market for data visualisation software has increased as a result, with a wide range of tools being available, and even dedicated programming languages, such as D3. SAP has a long history of Data Visualisation-capable tools and are a market-leader in the area with the SAP Analytics Cloud solution.

Although data visualisation is very much at the forefront of Business reporting, many companies are still not using it, preferring instead to rely on table-based reporting. This is down to many reasons, such as access to the necessary tools or even the ease of using those tools once they have them. Table-based reporting will always have its place in Business, but it does become more difficult to spot trends in larger sets of data, which is why data visualisation is very important to the most successful companies.

Consider the following sample of data, freely available from the Met Office website – it contains temperature variations by Month and Year for the UK, along with other metrics, such as Rainfall.

Looking at the full dataset, there are just over 1,300 rows in the table and there is no clear way of spotting any trends in the data from a standard tabular view.

A few data visualisations can help with understanding the information and there are a couple of general rules to follow to keep things as simple as possible:

There are more rules and general principles to be followed by looking on the International Business Communication Standards website, IBCS.com.

The following visualisation work is being carried out in SAP Analytics Cloud (SAC), which is one of the few products to meet the certification requirements of the IBCS.

Once the data has been imported into an SAC data model, the first logical visualisation would be view the mean temperature over time.

At first glance, it’s difficult to get a good picture of what’s happening – there is a lot of variation because the chart is showing the mean temperature for each month and doesn’t take into account the UK seasons. So if we focus on showing the chart by year and just taking the summer months (June, July and August), we see a trend in the data.

The chart is showing us the more recent Summers have been generally warmer than previously. One of the great things we can use in SAC is forecasting – so let’s apply a forecast to this chart and see what it shows us.

Bearing in mind the dataset isn’t as in-depth as the dataset the Met Office produces for their climate statistics, however based on the data loaded into the Model, SAC is predicting an increase in the Mean Temperature. Checking the Met Office Climate Projections (ukclimateprojections.metoffice.gov.uk) it’s actually about on par with what the Met Office is expecting, though perhaps in this case SAC is a little more conservative.

So let’s explore an alternative way to visualise the temperature data. As well as mean temperature, the dataset from the Met Office contains average minimum and maximum temperatures for each month. Dropping these into a Scatterplot chart, with the figures averaged by year, we get the following. 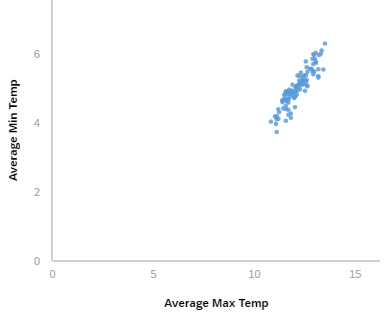 In this chart, years with higher temperatures are in the top-right and lower temperatures in the bottom-left. It’s quite an interesting clustering, but we have no idea how it relates to time. Using SAC we can colour the dots to the Century they relate to – this gives us an understanding of the distribution of temperature over time and as a result, a little more meaning to the chart. 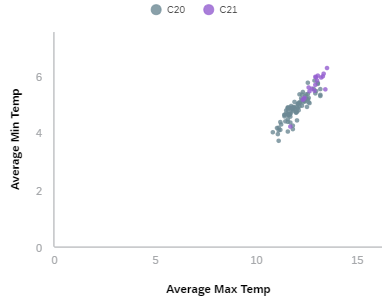 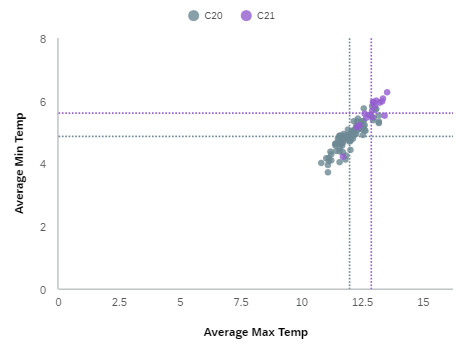 This data visualisation is telling us quite a story. Not only is this Century on average warmer than the last one, but SAC is predicting a continual increase in Summer temperatures, as per the first visualisation. Whilst you could have arrived at the same answer looking at the data in just a table, it would have taken a lot longer. And you wouldn’t have had the forecast SAC has given us.

Let’s consider another chart type available in SAC, the Heat Map – this time we will look at Average rainfall (mm) by each Century and Season. If we’re wanting to keep the visualisations as clear as possible, we should choose a different colour for Rainfall compared to the ones we’ve chosen for Temperature. The Heat Map enables us to see what the distribution is of rainfall for each Century and Season, where the darker the blue, the higher the average rainfall.

This visualisation is showing us the current Century is wetter than the previous one, with the largest difference being in Winter – it’s not a vast difference, 1cm, but it’s evident that on average more rain has fallen in the UK this Century compared to last. So let’s take a look at the trend over time for Rainfall, just in the Winter months and add a forecast to the chart.

SAC is predicting in very clear terms, that Winters in the future likely to be wetter than they are at present.

Using SAC, we’ve seen how easy it is to build great looking charts that enable us to spot trends in data and even producing some forecasting over the future, based on the data we already have. Each visualisation on its own tells a tale, in this case for the climate - about how the trend in Summer temperatures is an increasing one, how Winter is going to be wetter than it has previously, and how this Century has been hotter on average than the one before.

When you combine the visualisations together on one page they form a larger story, one that’s fully interactive for the user and where you wouldn’t gain that level of insight from looking at the data in a simple table. 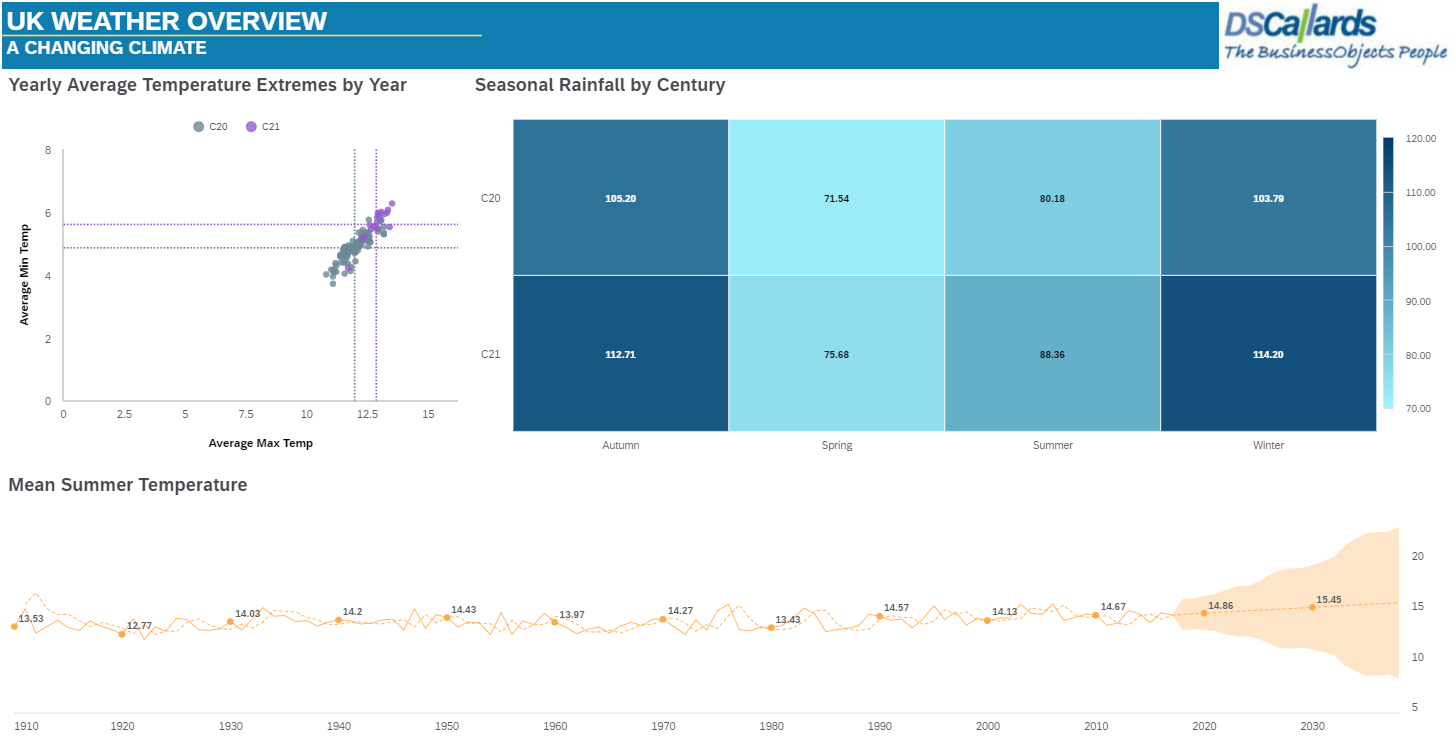 10+ years delivering solutions to customers, with a passion for visualising data, creating interactive analytics and helping customers get the best answers to their questions. 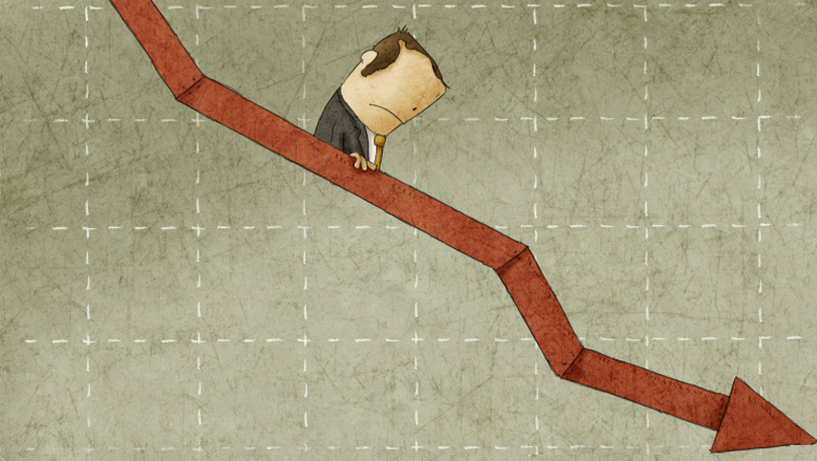 Dealing With The Data Blues

SAP BI 'How To' Blog 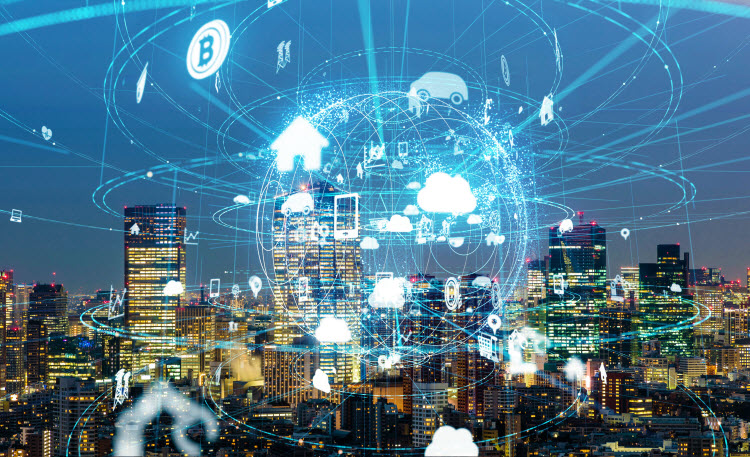 Why and How to Migrate Your Analytics to the Cloud